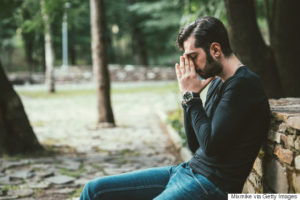 Every three seconds, on average, someone is attempting suicide, according to research out of India. The numbers of suicide attempts are exponentially higher than the number of completed suicides, which average every 13 seconds across the globe per the World Health Organization (WHO). Tragically, every minute of every day is influenced by some aspect of suicide.

Suicidality shows itself in a range of behaviors and thoughts that can become more fixed and concretized. There is a progression of pain and disconnection. Emotions are not linear. Thoughts can be disordered and scattered. There is no straight line or exact trajectory. That said, there is a continuum of suicide, where aspects of suicidality are portrayed by each individual in their own idiosyncratic manner.

Over my 30+ years of clinical work, these are the aspects of suicide I have seen in the consultation room and through crisis intervention lines. There are seven points on this spectrum, each with its own degree of severity. Clearly, some points are more intense and critical than others, but each is to be taken seriously and warrants professional help.

1. Ideation
Quite simply, you are thinking about suicide. You are rolling the idea around in your brain. Does this make sense for me? Would it be my answer?

Many people consider suicide in the abstract. What if? Thinking does not necessarily mean doing. Ideation is considering the option — usually, when there seem to be few options, and distress and overwhelm are at the fore.

2. Gestures
This is a seeming attempt at suicide by self-injury without serious or fatal consequences. Taking an overdose of aspirin or cutting one’s wrists are good examples.

(Please note, there is a distinction between self-harm and suicidal gestures. Cutting as self-harm is intended to relieve crushing emotions or to be able to feel something and no longer be numb; whereas, the intention of suicide is to cease the painful feelings and end one’s life. That said, be it self-harm — very common with trauma survivors who are at risk for suicide — or a suicidal gesture, both indicate a need for professional help.)

Suicidal gestures are a cry for help and, sometimes, attention. They are an alarm bell for action to be taken. These gestures are often labeled with the unfortunate term “para-suicide,” which minimizes the gravity of the situation. Repeated gestures are frequently a precursor to a completed suicide.

3. Passively Suicidal
This is a form of suicidal ideation. You are thinking about it, but know at this moment you would never do it. It sounds like a plausible idea because you are in so much emotional pain. There is a level of resignation in this thinking.

If someone magically took you out of your misery, you feel certain you would not fight back. You don’t want to feel so much pain any more. You are thoroughly depleted and paralyzed. You are exhausted on every level; you feel powerless and unable to change your current situation.

4. Active Thinking
This form of suicidal ideation is farther along the spectrum. You are developing a plan. You are working out the details. You know exactly what, when, and how you will do it. For some, there is relief in having a plan. For others, there is a grim satisfaction in imagining the impact their death will have on others. Maybe now they will understand how much I hurt.

5. Thinking and Doing
There are two forms of thinking-and-doing; one is planned and the other is impulsive.

Planned:
You are now making a concrete plan. You are making preparations, securing the necessary accoutrements, and orchestrating how you will make your suicide happen.

Frequently, when individuals have reached this step, they may present themselves as happy to their loved ones and therapists. They have a plan of action. They are resolved, and there is no more equivocation.

Sometimes, the plan is enough in and of itself and serves as a fallback position if everything goes horribly wrong. When there are self-doubts about the viability and impact of the plan, the individual may be open to outside intervention and assistance, and the plan may crumble.

Impulsive:
Impulsive thinking-and-doing is, as the name states, impulsive. It’s a flash of a thought and a rush of feeling that makes sense at the time. It’s an immediate way to end the internal anguish. Frequently, this occurs with teens and young adults.

This impulsivity can be accelerated by substance abuse that lowers the inhibitions, a history of risky behavior, unfettered anger, and unrelenting anxiety.

Impulsivity can also be triggered by a psychotic incident where there may be delusions and hallucinations. For example, voices in a young man’s head told him to kill himself immediately because all of his family were now living on another planet.

6. Chronically Suicidal
The chronically suicidal are individuals who, by virtue of mental illness, are always in and out of suicidality. Usually, they have been on psychiatric meds for years, and they have been hospitalized frequently.

Suicide is their default wiring. It’s where they land when their pain escalates; their thinking contracts, expands, or becomes chaotic; and they want to escape from the effects of their medications. The chronically suicidal want out; they want their internal struggle and torment to be over.

Slow suicide is evidenced by a lifetime of self-harm that chronically erodes a person’s health, well-being, mental stability, emotional resilience, and vital energy. There is inordinate pain, grief, and anger. Unresolved trauma is likely.

Slow suicidal people choose to stay stuck in their toxic and self-defeating spin and steadfastly refuse any offers of help and assistance.

Suicide is never easy. We know it’s not painless. This spectrum of suicidality delineates the range of behaviors and thinking in order to increase understanding and compassion and, perhaps, circumvent tragedy.

This column was also featured on The Huffington Post Canada.